Six Myths About the Banjo 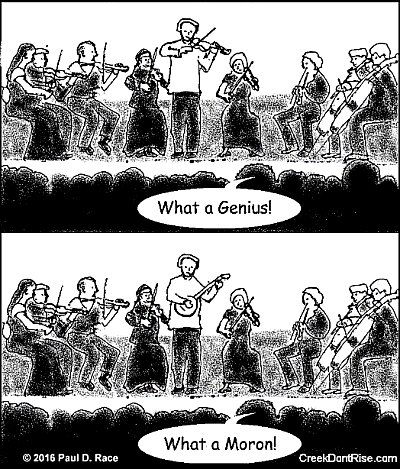 The banjo is the iconic American instrument, critical to the early development of most forms of American popular music, including “Tin Pan Alley,” Jazz, and Bluegrass.  Yet, cultural shifts starting in the late 1960s somehow caused banjo to be, not only neglected by most popular musicians, but derided (especially by non-musicians) as a relic of an undesirable past and a symbol of ignorance.

As a person who plays several instruments, I can’t help noticing that when I pick up a guitar, people start paying attention, but when I pick up a banjo, people roll their eyes.  Somehow, a host of popular misconceptions about the banjo have emerged, to the extent that some people think it’s outrageously funny just to see someone taking the instrument seriously.   I addressed some of the reasons for this in my CreekDontRise.com article “Whatever Happened to the Banjo.”   But this blog is for dealing with the most popular misconceptions.

The Banjo is Mostly Played by Ignoramouses.

A choir member in Michigan recently tried to find a banjo player for a “classical”-style piece with a complex 5-string banjo part. She discovered that 17 out of 19 of the banjo players she contacted had either bachelor’s or master’s degrees in music, and several were university professors.  This corroborates my experience, that most “serious” banjo players I know are well-educated people, including a few who gave up professional jobs to go “on the road.”

The Banjo is Only Useful for One (or Maybe Two) Kinds of Music.
The banjo has been widely used in jazz, folk, rock and every other kind of popular music (except most “Urban” genres, I suppose). Between 1865 and 1940, the banjo was far more popular than the guitar.  A century ago, classically-inspired banjo players filled concert halls in North America and Europe. And the guitar style we now call “jazz guitar” was invented on the banjo and transferred over to guitar when pickups became available.  Banjos also figured prominently in Rock hits by many acts, including the Doobies, Poco, and the Eagles.  Yes, Heavy Metal, Punk, Grunge, Disco, and HipHop have avoided the things, but that’s not the same as saying they’re “no good for rock and roll.”

You Can’t Play Sad Songs on the Banjo.
This was never true. It is a joke from an old Steve Martin comedy routine. New Orleans funeral dirges, Appalachian ballads, Jazz age torch songs, Folk Revival protest songs, hipster emo tunes, and many more kinds of sad songs have been and are being played credibly on the banjo. In fact Steve Martin can play quite a few himself.  (That said, being able to play sad songs well on the banjo makes me happy.)

The Banjo Can Only Be Played “Authentically” One (or Maybe Two) Way(s).
This is based on two wrong, but once widely asserted, notions: The notion that banjos have value only as a sort of historical reenactment, and the notion that only one or two of the dozen or more ways that banjos have historically been played “count.”  The truth is that, unless you’re Bella Fleck, anything musical you can figure out to do with your banjo has probably already been done. Don’t let people addicted to one style of music hold you back.

The Banjo Will Never Really Come Back.
It already has. More people are taking up banjo every day, and more new banjo models are constantly being offered. As an example, the Deering GoodTime, first introduced in 1996 as an affordable, but very playable and reliable American-made banjo, has now evolved into twenty-eight different models! At the same time, the market for Deering’s high end banjos is also growing. From the custom manufacturers to the mass-produced Chinese models that are barely screwed together before they are shipped to your door, every part of the banjo market is growing in numbers and variety.

You Shouldn’t Invest in a Good Banjo Until You’re Sure You’ll Stick With It.
Of all the myths, this is probably the most harmful.  Starting on a banjo that sounds bad, is hard to play, and/or won’t stay in tune will pretty much guarantee failure.  And that becomes a self-fulfilling prophecy – “See, I knew you wouldn’t stick with it – that’s why I only shelled out a hundred bucks.”

You don’t have to spend a fortune.  But you do need to guarantee that the instrument coming into your home will give your student a “fighting chance.”  If you have a friend who plays and can help you shop the local used market without getting burned, great.  Or buy from a reputable store that has technicians you trust to set it up right.  Or start with a banjo like the Deering Goodtime that you know will be set up right from the factory.

Banjo is Fun and Rewarding to Play
Wait, weren’t there supposed to be only six myths?  There were.  The statement above is true.  That’s why we provide so many free resources in our CreekDontRise.com Acoustic Instrument Primers to help our readers get off “on the right foot.”

Wishing you success and fun however you express yourself, I remain,