I came up with the idea for this series of articles when I found myself answering questions about home recording equipment from the early 1980s. Each explanation led to another question, and it occurred to me that some folks might appreciate an account that puts this gear in context. I’ll start in the days before 4-channel consumer tape decks and long before MIDI, and bring such topics in to the timeline when I got my hands on them. Please keep in mind that in 1967, where this article starts, there WAS no home recording industry, and the record companies considered home recording of any kind as a threat to their welfare.

Also, I’ll be including examples of recordings I made with gear that is – by any account – obsolete today, and which – in many cases – was bottom-of-the-line then. Some are a little embarrassing to listen to now, but it gives you an idea of what could and couldn’t be accomplished with the setups being described.

About 1967, while I was still in high school, my older sister Tess bought a Concord 727 reel-to-reel recorder with two detachable speakers and two cheesy little microphones. After all, in the mid-to-late 1960s, reel-to-reel was the only way to record music live, and to play music without worrying about folks scratching your records.

Like a number of early stereo consumer decks, the Concord allowed you to record on one – not two – channels at a time. The idea was that if you were recording, say, a board meeting, you didn’t need stereo, and that way you saved tape. But the Concord let me do something that not all tape recorders of its era would permit – listen to one channel while I recorded on another one in sync.

Ironically, that was something you couldn’t do on better consumer tape recorders. Three-head tape decks typically had one head for erase, one head for record, and one head for playback – because optimum record heads and optimum playback heads had to be designed a little differently. So even if you could play back one channel while listening to the other –

something that was impossible on most consumer 3-head decks, your second recording would be out of sync with the first one. The signal being recorded on the second track would be a half-inch or more behind the signal being played on the the first track, several milliseconds at least. (BTW, this technique WAS used in professional studios in the 1950s to produce “slapback” echo.)

On Tess’ cheap 2-head deck, the same head was used for play and record so there were no sync issues. I could record guitar and voice on one channel, then record banjo and voice on the other channel. Little did I know that studio pioneers like Les Paul had taken this technology to extremes decades earlier.

By the time I was about 18, I was already playing in rock bands and writing songs. By the time I was about 19, I was determined to write and play music for a living. No, that didn’t work out. But it motivated me to expand my recording efforts. By that time, multichannel recording – the ability to record four or more channels in sync – was standard in recording studios. But there were no home units with this capability until Tascam’s prohibitively-priced 2340s and 3340s were released in 1972 (the year I turned 20).

In the meantime, to get something like multichannel recording capabilities, I bought my own (second-hand) Concord 727 and some cheap, battery-powered Radio Shack mixers. (Don’t laugh; I had dropped out of college to play Rock and Roll and was working as a fast-food cook.)

Too clever by half, as the English say, I took to planning each recording out in advance in my notebooks. If there was going to be piano, it always came first, since I could tune my guitar and bass to the piano track but not the other way around. More often than not, I would sing lead on the first track.

Then I would put, say, bass and a vocal harmony on the second track.

Then I would play both tracks back through the little mixers and add, say, guitar and another vocal harmony, recording onto a borrowed reel-to-reel (which didn’t have to have sync capabilities, since I was recording to stereo on both tracks at once). That became my “master.” 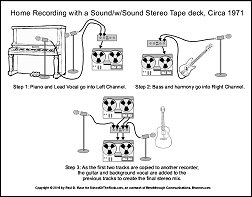 I used different instruments and didn’t always record the same instruments in the same sequence, and sometimes I would get other people to sing or play along. But this shows the basic process I used.
If you want to see a full-page downloadable poster that shows all three steps on one page, click the little thumbnail photo to the right.

Outboard equipment, at the time, consisted of a Gibson Echoplex that I had bought from a country singer during my second R&R stint, when we were playing a lot of oldies stuff that could use a “slapback” echo.

I had also bought a few Shure microphones for use in the band, and those made my voice and sax sound better on recording.

If the last step in the drawings above looks like it would load lead vocals and piano on one side and bass on the other, you’re right. Don’t laugh – in the early days of stereo, folks used to mix that way before they realized that things went better when the bass, bass drum, and lead vocal were in the middle. After a few experiments, though, I bought a second little mixer and crosswired them so I could mix the lead vocals, piano, and bass in the “middle”.

Then, since I was still singing out with acoustic trios and the like and was always running into really bad sound systems, I bought a couple used Tapco 6000R mixers. They had the advantage of having a built-in spring reverb, as well as bass and treble knobs that somewhat flattered my voice. For mixdowns (as in Step 3 above), I crosswired them to get a true stereo mix.

Some folks may wonder why I stopped at, essentially, three takes. Why couldn’t I mix the first two tracks down to one track of the second recorder and add another part on the other track, and so on? Besides the “losing your mind” problem, there were two limiting factors.