Recovering From a Hasty Move

So my music prep of late has looked a lot like building shelves. When we moved in a hurry, I filled the garage with stuff I want to keep or at least sort through before I got rid of it, and now I’m sorting stuff into bins and building shelves just to get the mess under control.

Part of the mess is my old studio rack, which is seriously cobwebby, by the way, and part of which was cannibalized for temporary setups. But there’s no room to set it up until I get all the other things organized. Plus oddball accessories like an old roland Octapad and the bass and high-hat triggers to go with it, tone modules and outboard gear that I haven’t used in years, etc.

I wanted the wide side of the 2″x4″s facing the room, because I may add some sort of doors or shutters in the future to make them more like cabinets. The wall is just under 9′ high and I wanted to use most of that height. So I screwed 2″x4″x8′ boards to the studs in the wall with the wide side on the wall itself, then built the rest out into the garage.

The lower and upper shelves are high enough to slide those transparent Sterilite storage bins into. I list the contents on a piece of paper and stick down the side so I can tell at a glance which bins are which. The middle shelf is higher, so I can fit my studio rack, computer, and other outsize gear. Or stack two Sterilite bins if I don’t need the room for anything else.

The shelf’s final measurement will be 16′ long and 8′ high. The posts are 4′ apart. The shelves themselves are about 17″ deep, though the sideways 2″x4″ posts add three inches to the overall depth.

The horizontal boards for the shelves came from an auto parts supply that went out of business. The building’s new owners filled a dumpster with them and threw the rest into their parking lot. They were glad for me to take it away. I kind of like the patina, and it saved me about $200, though I spent a lot of time pulling nails out of it.

While I’ve been working, I have been projecting old movies that I have already memorized on one wall to keep my ADHD under control (otherwise, my mind wanders too much and I’d probably be starting new projects instead of finishing the old ones). One future plan is to suspend a projector from the ceiling so I can show movies on a bigger “screen.”

Speaking of old equipment, I used to have some great, expensive PC I/O hardware that worked with cards in the slots of my PC. When those old motherboards went away, the manufacturers, including Turtle Beach and SoundBlaster, never updated their gear, so it’s worthless with today’s PCs. I haven’t the heart to pitch it though. The “sorting through” phase will come later.

In the meantime, in the house, I’m using gear that uses USB connections, and frankly, has more delay than I like when playing back existing tracks to add new ones. But I’ve worked around worse issues.

When the garage is under control, I’ll set up some version of a recording studio there so I can record other folks or small ensembles without crowding them into a bedroom. 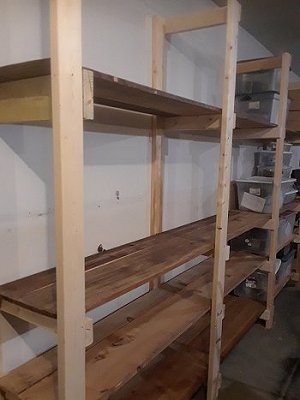 At the present time, the shelves are nearly finished. I’ve already sorted a lot of the clutter into bins that will fit on the shelves, so I’m looking forward to seeing the garage floor again. And then paring down the stuff I really won’t need or use again. (Goodwill has already gotten a couple trips’ worth of stuff.)

Perhaps I should mention that before I could start this project, I had to plug a 64-square-foot hole in the ceiling that the previous owner’s roofers had left there after installing new sheathing and checking on the rafters. Every time the wind blew hard, “blown” insulation would find its way into the garage.

So hopefully by spring, I’ll have a working, if vestigal, studio in my garage again. That doesn’t mean I’m waiting on that to write or play or even record music. Just that it’s nice to see the light at the end of this particular tunnel.