Home Jesus Music When Music is Not Enough – What Did The Jesus Movement Really Accomplish?

When Music is Not Enough – What Did The Jesus Movement Really Accomplish?

Recently a college prof asked if he could use one of my online articles (“A Brief History of Contemporary Christian Music“) as a supplementary text in a course he was teaching. He wanted to print off the web page, which is always problematic, since you get so much wasted paper, graphics don’t align, etc. So I said, “Why don’t I put it into booklet form and upload it to Amazon with a $1 price tag?”

He thought that was a dumb idea. But I didn’t. Until I started formatting the article for pdf-style publication and realizing just how many “holes” there were in the article. It does explain how Jesus Music, which originated among people with no connection to the established mainstream churches, gradually became so acceptable that its influence dominates many mainstream churches’ “contemporary worship” today. But I hadn’t really “set up” why the early “Jesus People” had already rejected mainstream religion, nor dealt with the other aftereffects you might have expected.

The following quote is from the (as yet unpublished) draft I am working on, summarizing the reasons that young people fled the established church in the 1960s, and the reasons why even those who eventually professed Christ continued to avoid “mainstream” religion.

At the time, many, if not most of the “Christian conservative” objections to contemporary music came out of the widespread notion that “real American Christians” all shared a single, homogenous, generally white middle-class worldview that touched on all aspects of culture, including hair lengths, pants colors, race relations, and political affiliations.

To put it in modern terms, being a “Christian” in the 1950s and 1960s wasn’t always about following the teachings of Jesus. In fact, many people who self-identified as Christians seldom darkened a church door and never read their Bibles. To such folks, calling themselves “Christian” was more about self-identifying as a member of a specific, relatively privileged class.

To Calvinists, as many of the most conservative Christians were, being born at the “top of the food chain” meant that that almost everything about way you lived, including the kind of foods you liked, the way you dressed to go to church, and the kind of music you listened to, were, essentially “ordained of God.” And if other people, say people of color, or even your own children who were rebelling against your attitudes, didn’t experience the same “blessings” God had seen fit to give you, that was “ordained of God,” too.

As far as music was concerned, music that contained any kind of syncopated beat was often called “jungle music,” a term that I now realize had deliberately racist connotations.

To the various precursors of the “Moral Majority,” “protecting the faith” wasn’t about reaching the lost or helping others as much as it was about sustaining a societal order, that just happened to benefit your social class above all others. God was not so much a loving Creator who sent His Son “to seek and to save,” and Who filled the Bible with commands to help and protect society’s most vulnerable members. He was more like a divine godfather constantly ensuring that things always worked out for His “chosen ones.”

In the meantime, millions of young people – including millions who grew up in church – were given the impression that God hated them for liking Rock and Roll music, for questioning the wisdom of Asian land wars, or for thinking black people should have the same rights and opportunities as white people. Is it any wonder that, among the various cultural revolutions of the 1960s, so many churches lost so many of the next generation?

Unlike the mainstream church of the 1960s and 1970s, the Jesus People worked hard to follow the example of Jesus and His disciples in helping people across racial, cultural, and social barriers. They sacrificed to feed, clothe, and house the poor, and otherwise to reach out to the disadvantaged with both physical and spiritual help. A half-century later, the influence of the Jesus People’s music remains – hardly any churches outlaw guitars any more. But their drive to help the hurting and disadvantaged of all races, cultures, and classes is all but forgotten.

I wouldn’t have spent so much time thinking about this, but recent political upheavals have proven that many of the problems that drove Baby Boomers out of the church in the 1960s seem to have reemerged with a vengeance in recent years. These include ingrained (if not verbalized) racism, misogyny, and embarrassingly gullible alignment with political causes that have nothing to do with faith or morals and everything to do with making rich white men richer, to the very real hurt of almost everybody else.

Back in 1974, I was a counterculture Christian (what some people would have called a “Jesus freak”), fellowshipping with a couple dozen churched Christian friends my age. I had no problems with cultural boundaries, until a friend turned to me out of nowhere and told me he wished people would stop bothering Richard Nixon and leave him alone to do his job. “But what if what they’re saying about him is true?” That didn’t matter, Nixon was still doing more for the cause of Christ than “the other guy” would have. Ask me if I’m having a sense of deja vu.

I do know that, sadly, white bigots and haters, as well as corrupt white politicians tend to self-identify as Christians, even if they don’t go to church, don’t read their Bibles, or show any behaviors or attitudes that characterize Jesus and His Disciples. In the case of poor whites, this is still a way of self-identifying as a member of a specific, relatively privileged class. In the case of corrupt politicians, it’s a way of getting votes from religious people who don’t look too closely at the politician’s record. (For example, how can so many men on their third wives say – with a straight face – that marriage is “between one man and one woman”? Or how can people who are working to make it illegal for child care centers to ban guns call themselves “pro-life”?)

So when the polls report that “white Christian” voters overwhelmingly supported some racist, adulterous, lying demagogue, I know that the polls are exaggerating the influence the church has over any of this.

But I’ve also sat next to members of my own church – one of the least racist and reactionary Bible-based churches in our region – who were gloating that a slate of notoriously corrupt demagogues had recently been elected with the help of Christians, because they were still “better Christians” than “the other guys.” Even more alarming, I’ve heard those members and other “Christian” friends gloating that the demagogues were working so hard to dismantle public education, to rob the working poor of access to healthcare, to rob the desperately poor of food assistance, to overturn regulations that help keep our air breathable and our water drinkable, to dismantle financial regulations meant to safeguard us against another recession like the one that recently made millions of working, responsible (and even white) families homeless, to dismantle programs intended to reduce the number of unarmed black men killed by police for no reason, to establish new barriers to black people voting and black votes being counted, and to fulfill the gun manufacturers’ dream of arming every many woman and child in America with military-grade automatic weapons.

Gloating! And saying, “We’ve finally gotten our chance to ‘Take America back’ for Christ!”

If you don’t see Jesus or anything He ever taught or did in that above list, don’t feel bad. Neither do I.

But while adopting more contemporary approaches to Christian music and especially worship, the established church managed to avoid adopting biblical attitudes toward people of other cultures and classes.

I don’t blame the Jesus Movement, you understand. Its cultural reach far belied the number of actual participants – if the Jesus People had all joined established churches at the same time, they would barely have registered a bump in overall attendance figures. But I am disappointed that the cultural attitudes that drove so many young people out of the church in the 1960s seem to have become worse in many churches, and that the pulpits that have not joined the call of the demagogues to stifle our God-given sense of compassion toward outsiders are nevertheless strangely silent on the subject.

Maybe what we need is a new Jesus Movement – one that, like the first one, demonstrates not only Biblical truth but also the character of Christ.

In the meantime, I would surely appreciate it if haters, bigots, misogynists, and blind followers of corrupt demagogues would stop calling themselves Christians. 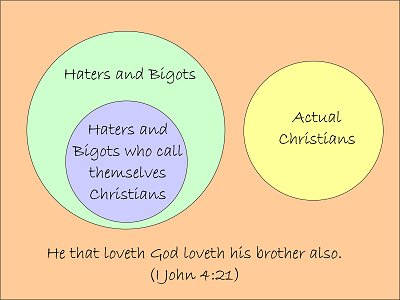 Or at least if people who actually read the Bible and try to follow the example of Jesus would stop letting them get away with it.