The music industry is fraught with hazards, even when you’re dealing only with the best and most professional people and companies. For example, you could get signed by a legitimate record company that loses a major artist and all the revenue that goes with her the next day, so they can’t afford to promote your music, your CD goes nowhere, and you wind up losing your contract in a year – with all of the masters you poured your heart into controlled by a record company that really has no reason to promote you now. And that’s the “legitimate” industry.

Beneath that tier, there are a lot of folks who are doing their best, and who will try to give you a fair shake. Some give lessons, some run recording studios, some “freelance” at managing or booking, and so on. I have met many helpful people in this category. I have also met many who want things to work out for you, but make promises they lack the resources to keep. And a few that are just plain flakes. “Buyer beware” when you’re paying for any kind of service, or signing any kind of agreement that lasts longer than a few months.

But at the very bottom (morally speaking) are a bunch of folks whose business model is based on lying to people who are most desperate for some sort of success, and therefore most vulnerable to false promises. I don’t have room to address all the scams, but I wanted to point out a few that acquaintances have fallen for recently.

Prepay “Record Companies”
An example might be fake record companies that make you pay up front to have a record made, but they promise to get it on the radio and make you a star once the recording is done. This group is a little like the fake contractors who ask you for a $10,000 down payment on materials before they can get started on your home remodeling project, then just take the money and never come back. A real contractor will never ask for money up front. In the fake record company version, you may even get a bunch of CDs out of the deal, but once your check is cashed, that is the last thing they’ll do for you. And in the meantime, you’ve spent a lot more money than if you’d just gone to a legitimate studio and hired a legitimate producer, but you’ve come out of the deal with a recording that probably doesn’t sound good to anyone outside your immediate family.

To me the tragedy of these encounters goes beyond the lost $10,000 or whatever. It’s the inevitable disappointment of the musician who finds out he has a shipping container of product nobody wants because the songs weren’t ready and the singer wasn’t ready either. But it’s easier to tell someone what they want to hear and scam them than it is to tell them what they don’t want to hear and try to get them to invest in their own musicianship.

Fraudulent Billing
I once encountered a “studio” that would record a live track of the wannabe’s vocal and guitar, then wait until the wannabe left, spend about an hour adding “bass,” “drums,” and “violins” with their MIDI setup, then charge him hundreds of dollars for bringing in the non-existent “live musicians.” If you’re getting charged for studio time, be sure to be in the room.

Prepay “Contests”
Decades ago, I entered a couple songwriter contests where you had to send a cassette and $10 to enter. I realize now that the thing was more like a “raffle” than a contest. If they could get 50,000 people to enter, they could easily afford to award some random entrant $10,000 – or better yet $10,000 “worth” of gear, which they got from some big chain that donated most of the equipment for “promotional purposes.”

I’m not saying that every contest, or even every contest that asks for an application fee, is a scam. Only that it’s easy to set this sort of thing up. So before you send money and get your hopes up, check the “contest out.” See especially if last year’s winners are really any farther along in their career than they were before they “won.”

Fake Radio Promotion
The newest version of the contest scam takes the whole thing a step farther. At least one company seems to be making a nice living offering to promote the music of “contest winners” on fake radio stations. This scam is the reason I’m writing this article now – two of my friends have recently fallen BIG for this scam.

Apparently one member of the scammer’s team does nothing but surf the net looking for indie musician web sites. When they find a potential sucker, they send an e-mail like this one:

Thanks for checking in. You’ve got a good thing going and I’d like to help you get to the next level. Aside from the major record labels, there are other organizations that can help you to secure significant airplay. Lately, we’ve been receiving some of our best music from The [name withheld] Music Awards. This company is covering the cost to get artists not only on [fake radio station name withheld], but on an extended network of stations worldwide. Therefore, you may want to consider submitting your music to them at [URL of fake contest scammer withheld]. Just a thought. I hope that this is helpful.
Please keep me posted on your success and thanks for tuning in!
Sincerely, [fake name withheld] Program Director [fake radio station name]

Musicians all over the world have gotten the exact same e-mail, with different fake dj names and different fake radio station names. Those who fall for it, get all excited, pay the “entry fee” (~$10), and send in a song. (By the way when someone you have no relationship starts their e-mail by pretending you’ve already had contact – “Thanks for checking in” – that’s always a sign of a con.)

Nearly everybody “wins,” so they get a plaque, and a few folks actually get invited to an “award ceremony.” But that’s all just to soften you up for the real pitch. Now that you’ve “proven yourself,” they claim they can really help your career by getting your song played on radio stations all over the world. For $50 a month.

In fact, there are no radio stations. There are a number of internet streams that they have given names that sound like radio stations that belong in LA, Dallas, Tokyo, and other places. But all of the streams come from a single spam server in Oregon. And as far as I can tell, nobody listens to them except the musicians they have conned, checking to see if their music is really getting played.

Do the math. Assuming it cost $10,000 a year to keep the fake web sites and their streams up and running. And they have a hundred victims, er “customers” at any given time, that’s an easy $50,000 a year they’re making just by scamming wannabes and streaming songs that nobody actually listens to.

Who would fall for that? Er, two of my acquaintances who should know better have fallen for it within the last three months. And neither one thanked me when I told them to save their $600 a year because it was a hoax. They were so excited to join the hundreds, if not thousands of other “winners.”

The Fairy Godmother Does Not Exist
I know, you’re tired of people telling you to work harder, get better, and take charge of your own career and promotion. Some people DO seem to find shortcuts. But most of us don’t. And even for those who do, there is no guarantee of longterm success, unless they pour the same amount of energy and hard work into their career after the big break as they did before.

If you have an elderly relative who has fallen for such scams and loves to tell his friends at the rest home that his songs are on the radio, or his CDs are in the stores, don’t bother bursting his bubble. But for the rest of us, the sooner we get on with real life the better.

There are folks who can help you and whose services are worth paying for. I link to a lot of their blogs and web sites in the Creek Don’t Rise and School Of The Rock discussion forums. But legitimate folks will always make certain you understand exactly what you’re getting for your money and that you are, ultimately, responsible for your own success.

The next time someone promises you the “big break” you’ve been praying for, but money has to change hands first, run do not walk.

Best of luck all, and do what you can to keep the dream alive.

Here’s a followup from June 30, 2017: The fake radio station scammer spammed Annie Lennox to tell her that he can help her get airplay on his (fake) stations. 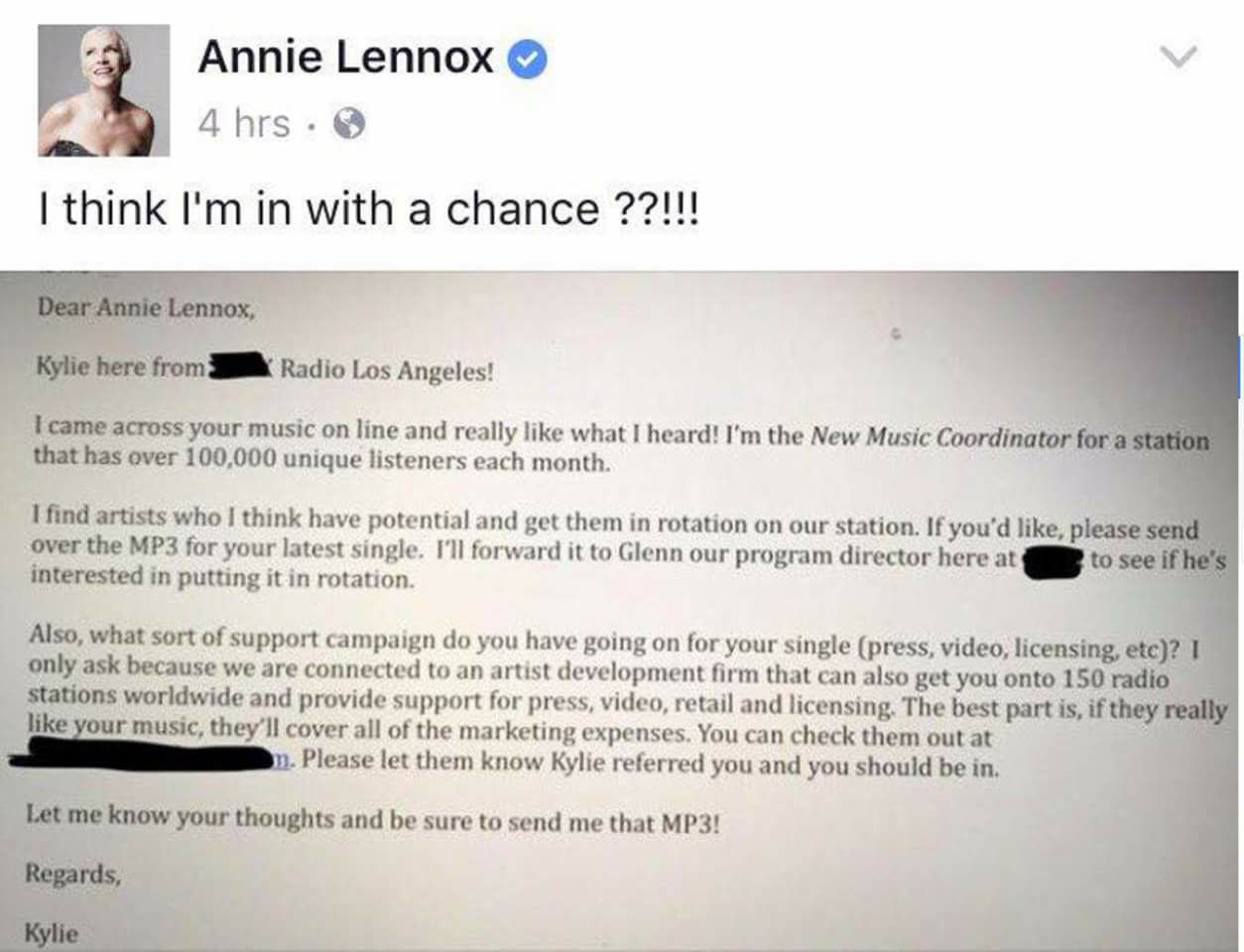 Yes sir, he obviously knows a LOT about the music business. 🙂